At the surf school Quiksilver Bidart and Guéthary, our goal is to make you progress as quickly as possible but always safely and with pleasure.

The purpose of the lessons is not only to teach you the technique of surfing, but also to make you understand the waves and currents, safety: everything that will allow you to fully appreciate the surf.

Born in 1958, Christophe Reinhardt owes his passion for surfing to his father Bruno, one of the pioneers of French surfing at the end of the fifties (more info on the History page). He was put on a board at the age of four, and for a long time during the sixties he was the youngest surfer in France !

He was taken to all the spots with his father and his gang, which included Michel Barland of Barland Surfboards and Jo Moraiz , who started the first surf shop in France in 1965. Then round about 1968 he met other surfers his age, and became part of the new generation of French surfers, with people like Gibus de Soultrait ( Surf Session), Diego Burgard and Alain Gardinier.

Christophe is known for being fearless in big waves, and has often surfed in Hawaii - his favourite spot being the famous wave at Pipeline. Like a lot of his generation, the seventies was his decade of traveling - there are no borders in the search for the perfect wave. From the 80s to the present day -still searching out the biggest waves- Christophe has earned a well-deserved reputation as a Big Wave Rider.

After trying out various different careers in surf, from shaping boards and sales to opening a surf shop, he decided to become a surf instructor, a vocation which combines his love of the ocean and the waves with the pleasure he gets from introducing other people to the sport he loves.

The other surf coaches of our surf school 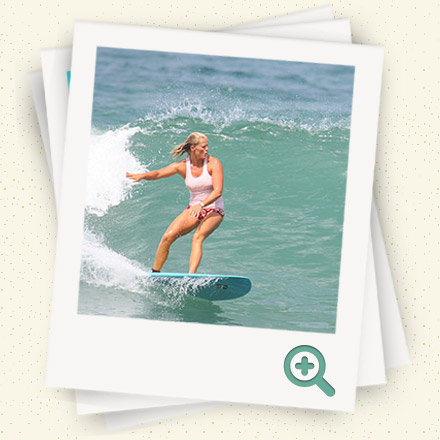 Johanna came to surfing late, but was already an accomplished professional sportswoman in the world of extreme ski-ing.

She has the State diploma of surfing, and also extensive teaching experience from her first career as a ski instructor.

When she followed Christophe into the waves, she discovered her own excitement and enthusiasm for the sport, quickly gaining experience and expertise in her regular sessions at Parlementia. 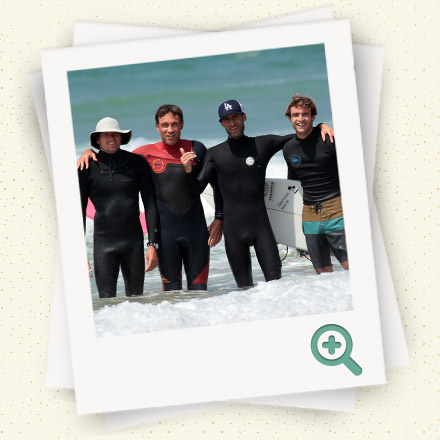